Opioid Use May Increase the Risk of Sleep Disorders

The fact that the country is currently battling a health crisis, often referred to as an opioid epidemic, is not news to anyone lately. It has been declared a public health emergency and the numbers are scary:

How Do People Get Addicted to Opioids?

One of the main causes of opioid addiction and for this national health problem is increased access to prescription pain medicine. 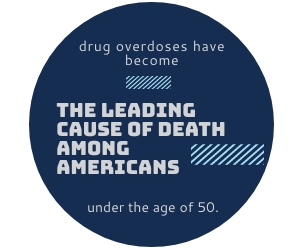 Opioids, such as hydrocodone, codeine, and oxycodone, are often prescribed for pain relief following surgery, injury, or to manage chronic conditions. Yet the powerful effect of these drugs makes them highly addictive. Opioids have been linked to higher degrees of dependence and abuse.

Now, across the country, drug overdoses have become the leading cause of death among Americans under the age of 50. As various entities work to combat the epidemic and bring these numbers down, pharmaceutical companies and doctors’ practices are being scrutinized. At the same time, the benefits of drug-free therapies for pain are being highlighted by the medical community.

Impact of the Opioid Epidemic in Ohio

Our state has been one of the hardest hit by this crisis. Ohio has the second-highest rate of drug overdose deaths from opioid drugs in the country. People misusing opioids are dying at a rate of nearly 40 for every 100,000 residents. This rate has skyrocketed in the past 15 years. In 2010–at peak of the epidemic–physicians in Ohio were over-prescribing opioids at the staggering rate of 102.4 scripts for every 100 residents.

Watch this video to learn more about the extreme toll that the opioid crisis and drug addiction has taken on communities in Ohio.

Drug addiction and dependence aren’t the only dangerous effects. As the number of people using and misusing opioids has risen in Ohio, so has the number of people infected with HIV and hepatitis C, for example. The CDC has identified multiple counties in Ohio that are at greater risk of HIV and hepatitis C outbreaks because of increased drug use. Similarly, babies born with neonatal opioid withdrawal syndrome (NOWS) in Ohio is now eight-times higher than it was in 2005.

Link Between Opioids and Sleep Disorders

As this crisis unfolds, another disturbing side effect, or perhaps underlying factor, has been discovered. Researchers are now sounding the alarms about an increased instance of sleep problems related to the use of opioid pain medicines.

Recently, the National Center on Sleep Disorders Research has started working with the HEAL (Helping to End Addiction Long-termSM Initiative) launched by the NIH. The goal is to gain a deeper understanding of the interaction between sleep, circadian rhythms, and opioid disorder. The current hypothesis is that the two issues are interconnected, meaning that the relationship goes both ways. Using opioids causes disrupted sleep patterns and, at the same time, people with problems sleeping may be more likely to use these drugs.

Researchers are warning patients and physicians about the link between these powerful and often misused prescription drugs and common sleep disorders – particularly insomnia and sleep apnea. According to the American Academy of Sleep Medicine, chronic opioid use can disrupt sleep and raise the risk of sleep-disordered breathing.

Do Pain Pills Cause Insomnia?

It is true that people suffering from chronic pain are more likely to also have restless sleep. Yet the high number of people with opioid use disorder complaining of insomnia and sleeplessness points to a greater problem. Doctors have found that some patients with long-term pain use opioids incorrectly as sleep aids, but research is now showing that it may make chronic insomnia worse or even cause acute insomnia.

Insomnia now considered a significant adverse side effect for those taking opioids over long periods – both as prescribed for pain relief and not. This type of painkiller can disrupt sleep by decreasing sleep efficiency, slow-wave sleep, and REM sleep. Trouble falling asleep and staying asleep is particularly common when patients stop taking the medication or during the withdrawal process. 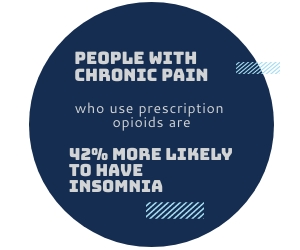 We know that insomnia is 42% more common among people with chronic pain who use prescription opioids. One study of military service members found that the instance of insomnia-related symptoms was higher for patients following surgery. This increased rate of sleep problems was associated with chronic opioid use, more frequent healthcare visits, and more expensive medical costs.

Among the group studied, the rate of insomnia diagnoses doubled after surgery. Those with insomnia were more likely to still be taking opioids one year later and 154% more likely to have three or more prescriptions for the drugs within the two years post-surgery.

The Need for a Better Understanding of This Link

This type of research clearly indicates a three-way connection linking chronic pain, insomnia, and opioid dependence. What is still unclear is which issue is causing the other. Some psychiatric books published in the past decade have also made reference to a condition called “opioid sleep disorder.” Though there is still much we don’t know about this condition.

Now researchers are asking a whole new set of questions… Is pain-causing patients to rely on the drug which then leads to insomnia for some? Do opioids simply make the symptoms of insomnia worse? Or are those with a greater disposition to insomnia more sensitive to the medication? Is it possible that insomniacs are treating other symptoms with opioids? Or are people with insomnia more at risk for dependence on drugs?

The Importance of Awareness Among Healthcare Practitioners

It is critical for healthcare providers to be aware that opioid use is associated with insomnia and sleep apnea. The researchers studying this complex issue have stressed the importance of screening for sleep disorders before and after the prescription of pain medications. Better coordination between doctors and sleep specialists could decrease the risk of exacerbating existing sleep disorders and help diagnose them sooner.

Ultimately, this could also help curb the risk of opioid addiction. Involving sleep clinicians in the treatment process for patients undergoing surgery and getting therapy for long-term pain could be a solid first step towards a solution.

Get more information about Effective, Drug-Free Treatment for Insomnia.

For more information on sleep disorder testing, diagnosis, and treatment options, contact Sleep Health Solutions at by calling or sending us a message.

Monday through Friday: 9:00 AM – 5:00 PM
Saturday and Sunday: By appointment only

Please fill out the fields below and one of our specialists will contact you shortly. Want to speak to us now? Call us at (330) 923-0228.