Despite all decades of research, we still aren’t sure why our bodies need sleep. However, if we don’t get the recommended 8 hours of sleep each night, we do know that the impact on our health can be devastating. Let’s take a deeper look at the top 10 effects of long-term sleep deprivation.

Getting less than 5 to 6 hours of sleep per night has been linked to an elevated instance of hypertension. Because sleep helps our bodies regulate hormones that cause stress, a lack of rest can amplify the effects of stress on the body. Long-term sleep deprivation has been associated with increased blood pressure, higher heart rate and inflammation. All of this puts unnecessary strain on your heart.

Sleep deficiency causes a greater instance of fatal cardiovascular problems, such as heart attacks and stroke. Doctors and researchers believe this is because the lack of sleep may disrupt the parts of the brain which control the circulatory system or cause inflammation that makes the development of a blood clot more likely.

The effects of continual sleep problems include rapid weight gain. A lack of sleep is related to higher amounts of cortisol, a stress hormone; the resulting anxiety, stress and frustration often contribute to emotional eating and poor nutritional habits. Another hormone, called ghrelin, is produced in the stomach and has been associated with sleep long-term deprivation; an excess of ghrelin can actually make people feel more hungry.

Over time, sleep deprivation negatively impacts the body’s metabolism and eating habits. Tiredness often leads to unhealthy cravings and overindulgence, accompanied by a decrease in stamina and physical activity. Research has shown that people who feel unrested are more likely to choose foods that are rich in carbohydrates and sugar. 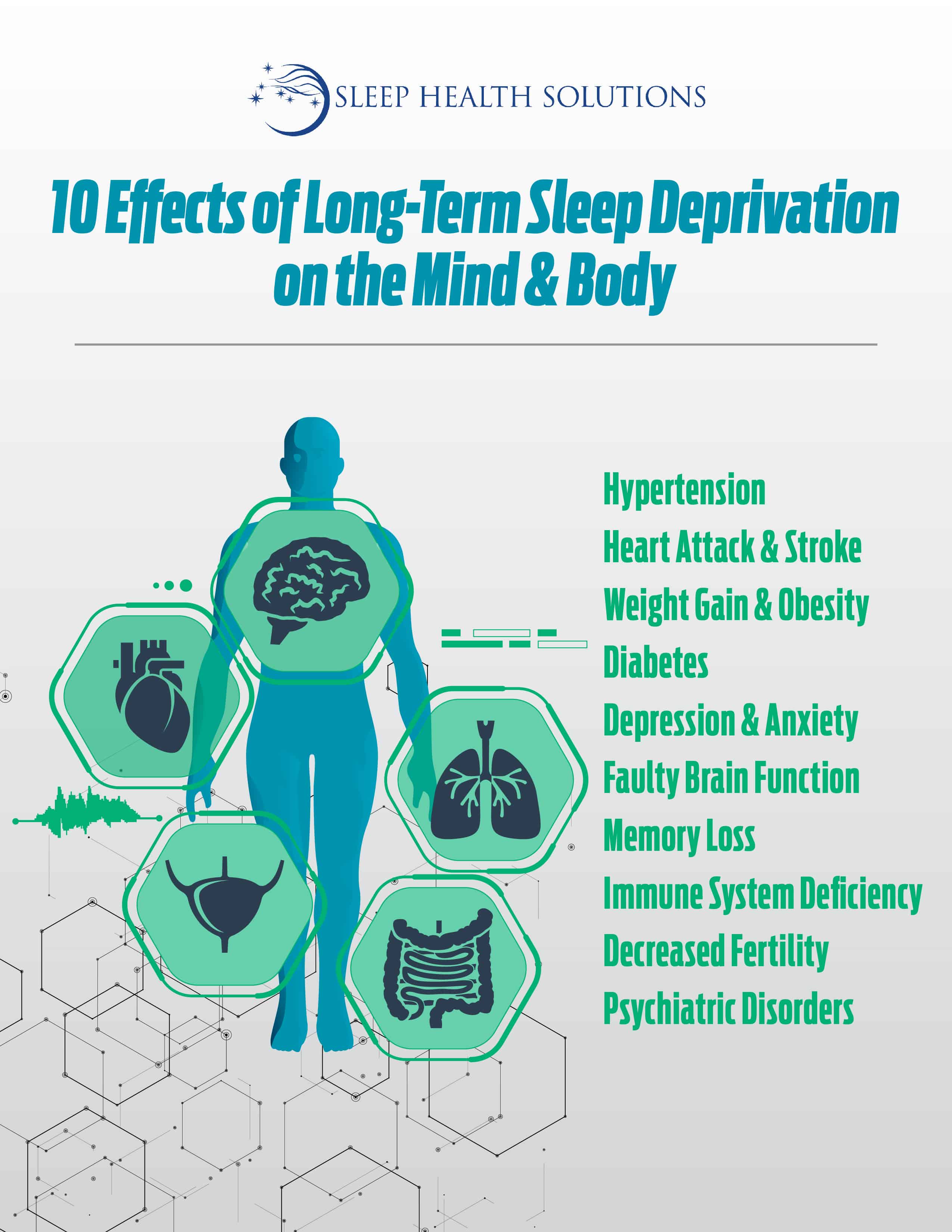 Diagram of the main 10 effects of long-term sleep deprivation on the human mind and body.

Getting as much as 5 hours of sleep at night is still not enough. Research has shown that sleep deprivation may disrupt the body’s method for processing glucose which cells use for fuel and the amount of insulin that the body produces. This is why it’s considered a significant risk factor in the development of type 2 diabetes.

Most people feel irritable if they haven’t had a good night’s sleep, but long-term sleep deprivation has been linked clinical depression and a more general loss of motivation. Contrarily, patients with depression often have irregular sleep schedules. Sleep cycles and mood regulation are both regulated by the hormone melatonin. In fact, lower levels of melatonin are often found in people suffering from depression and those affected by insomnia.

Anxiety and panic attacks can also be a common reaction for people struggling with chronic sleep deficiency; they’ve have shown to have a lower tolerance for even mild daily stressors. Like depression, sometimes it can be difficult to understand what came first: anxiety or the sleep disorder.

After just one unrestful night, we have all experienced mental fog, fatigue, short temper and lack of focus. When the brain is not able to rest enough over a longer period of time, mental faculties can decrease drastically. We know that adequate sleep is necessary for people to feel sharp, concentrate and learn, but it also impacts our problem-solving skills and the ability to regulate our emotions and make decisions. Sleep deprived people also have problems with balance, reflexes and motor skills; as a result, they are much more likely to injure themselves. Drowsiness is a major factor in car accidents.

Many scientists believe that sleep is important for giving the brain time to organize itself and, specifically, to commit information from the short-term memory to the long-term memory. Adequate sleep is crucial for memory recall. Studies show improvement in memory loss after just one night of restful sleep.

Like the rest of our body, the immune system performs best when we get adequate sleep. A prolonged lack of sleep causes a similar reaction to high levels of stress; it can decrease your antibody response and make you more vulnerable when you’re exposed to viruses, even the common cold and flu.

Not only can sleep disorders lower libido, they can have a devastating impact on anyone trying to conceive – both men and women. The same part of the brain that controls circadian rhythms also regulates the release of reproductive hormones. Regularly getting fewer than 7 hours of sleep can lead to lower levels of testosterone and the hormones which trigger ovulation, making conception even more difficult.

An extreme and long-term lack of sleep can lead to a number of psychiatric disturbances. Some people suffering from extended periods of sleep deprivation have experienced symptoms including disorientation, paranoia and hallucinations. These types of symptoms can sometimes be confused or associated with schizophrenia.

Worried about How Sleep Problems are Affecting Your Health?

Sleep does so much more than keep our mind sharp. Long-term sleep deprivation can negatively affect your emotional state and physical health. Sleep Health Solutions of Ohio can help identify your sleep problems and find solutions to get the rest that your body needs.

Monday through Friday: 9:00 AM – 5:00 PM
Saturday and Sunday: By appointment only

Please fill out the fields below and one of our specialists will contact you shortly. Want to speak to us now? Call us at (330) 923-0228.